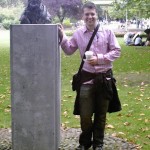 I received my PhD from SIU Carbondale in 2006 and worked as a Marion L. Brittain Postdoctoral Fellow at Georgia Tech from 2007-2010. In 2010, I joined the faculty at Georgia Gwinnett College as an Assistant Professor of English, where I teach composition and British literature courses. My thematic composition courses have covered topics such as writing rock and roll, eating ethically, postmodernist revision, and James Joyce’s Ulysses. I have published essays on the writing of Samuel Beckett and Zadie Smith, and I have delivered conference presentations on Irish rock music, the TV series Veronica Mars, the writing of Jonathan Safran Foer, and the films Once, Beckett on Film, and U2:3D.